From the outside world (public network), this would be seen as a single relay (single IP address / single DNS record), but internally, each instance would be an independent node, performing its own sync procedure. There's a chance for these instances to be slightly out of sync between each other (eg: after a restart of one).

My question: is there any problem from the protocol perspective (Ouroboros, topology updater, etc) with having multiple round robin nodes answering as the same relay?

Short Answer: No there is not any technical limitations from the protocol or topology updater preventing you from doing this.

Considerations: Starting external and working in, we need to consider the DNS vs Public IP side of this. In my opinion a Public IP should be avoided because if it changes, you have to resubmit your stake-pool registration.

Excluding a public IP, we are left with DNS. There are 2 main ways you can setup the DNS: just an A Record or an SRV Record. It is worth noting that the SRV record doesn't know if a network is down/a-server-is-down, so it will not replace your load balancer for those type of services.

Either decision, the next step is your load balancer(s). I haven't actually set one of up for this use case but my initial thought would be this is where you run the topology-updater script. As well as, you know, balance the load. For the topology updater, make your valency equal to the number of relays you have (if using DNS, otherwise this won't work). Doing this allows more than one connection per peer. This is important because you are using a load balancer which could potentially create a situation where there are no incoming peers to a relay. You will still want to run a topology pull script to set your relay nodes' topology.

I hope this helps! 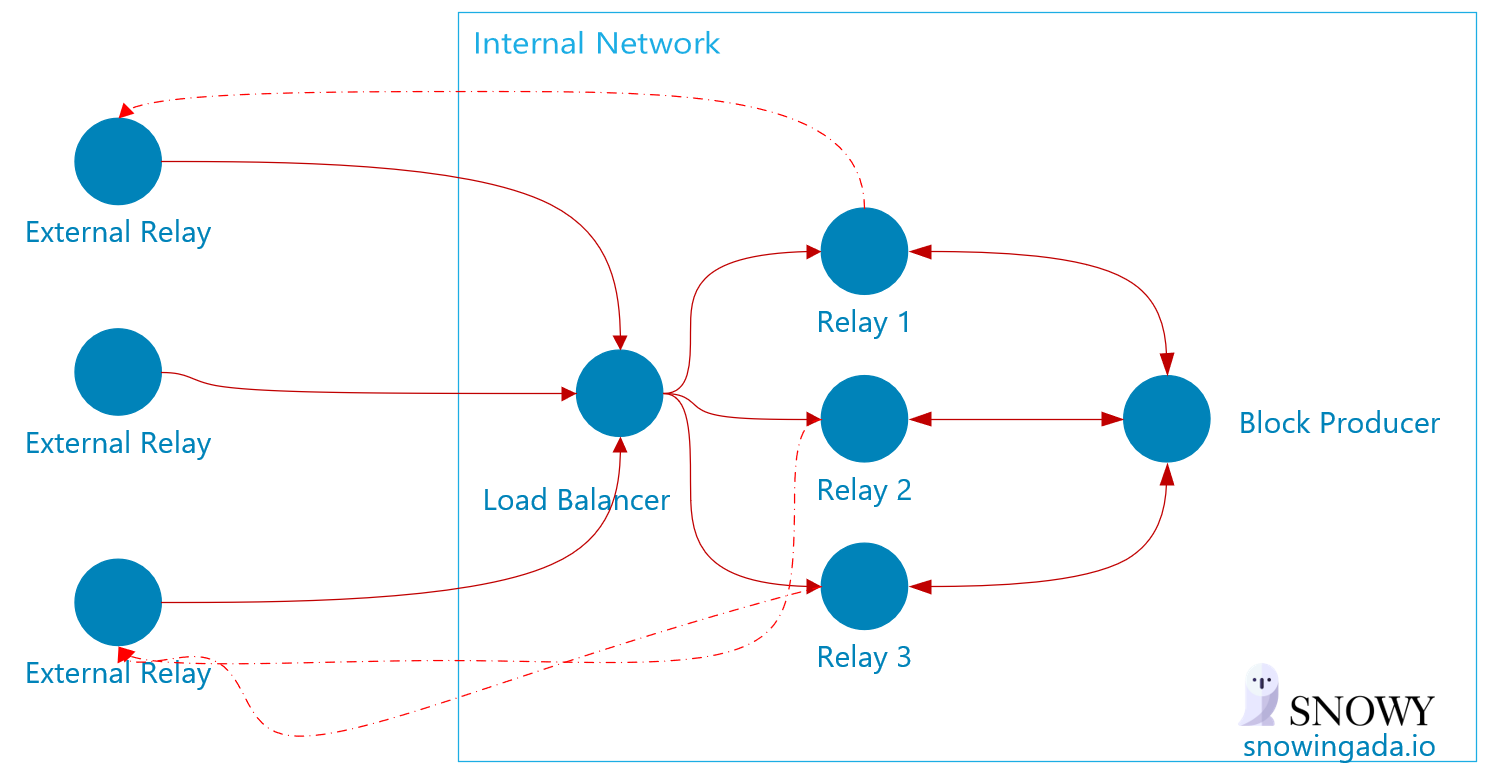 Not the answer you're looking for? Browse other questions tagged ouroboros spo topology or ask your own question.

22
How secure is Ouroboros Proof of Stake compared to Bitcoin Proof of Work?
6
Is the Ouroboros Praos protocol proprietary?
5
How does Ouroboros disincentivize bad behavior?
4
Can someone who is familiar with Ouroboros explain its fault tolerance threshold?
5
Difference between Ouroboros' Proof of Stake and Solana's Proof of History
4
Ouroboros – Which version is currently implemented?
4
Can I avoid using a public IP on Block-Producer (BP) node?
2
What does it mean that Ouroboros is formally verified?
1
Why Ouroboros Chronos and Proof-of-History need synchronization of time?
1
Are there papers (e.g. game theorie based) on how Ouroboros encourages decentralization of ADA among its users?