I'm trying to list all the utxo's at my Yoroi wallet address. I set the variable 'address' as my receiving address but when I run the command, cardano-cli query utxo --address $address --mainnet, nothing shows up. I also tried this for a Daedalus wallet I have used often and I get the same result (will include a screenshot below). I can confirm there have many tx to and from this wallet so I'm confused why this is the case. I'm using the same linux VM for this command which I have a cardano-node running and synced up to the chain in. Any help is much appreciated!

It is because Yoroi generates a new address after each transaction for privacy reasons. People who only know this address cannot see how much funds you have and what transaction you did in the past. At the same time your wallet can with its private key derive all address and show to you all the funds you have.

Try taking the last address where you received funds. It is displayed in the transaction tab in Yoroi. This address should show some UTxOs if you do the same query.

Cardano-wallet software (which both Daedalus and Yoroi use extensively) derives addresses from a single master key, as described in the BIP-32 standard. This key-derivation is briefly summarized by this infographic: 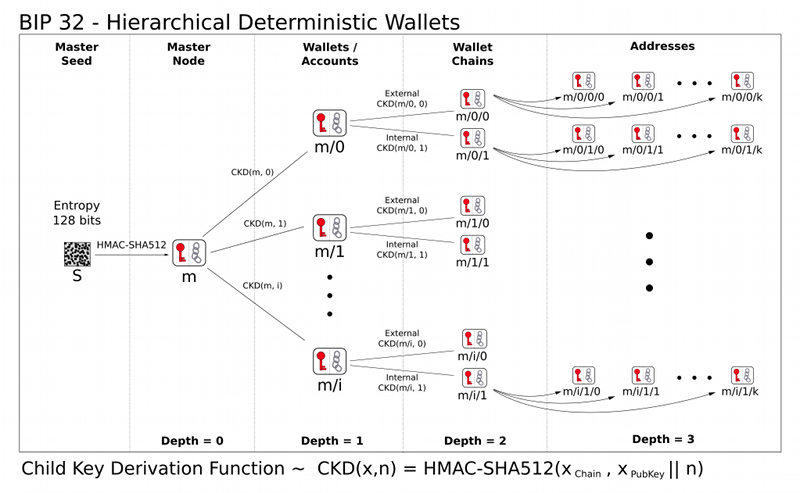 As you can see, many addresses can be derived from a single master key. Yoroi and Daedalus automatically create and maintain many such addresses for anonymity purposes, since one cannot prove ownership of two or more addresses without possessing the associated keys.

Not the answer you're looking for? Browse other questions tagged cardano-cli native-assets yoroi or ask your own question.

5
.NET cardano-cli query utxo Process freezes on a specific address
2
Cardano-Wallet Killed
7
Finding related addresses and total balance of wallet for any given address
9
How can a single Cardano Wallet have many addresses?
1
Get a list of top asset hodlers for a specific asset
1
About building a transaction using the cli
0
cardano-cli transaction build-raw error
1
get wallet skey/vkey from mnemonic